This crunchy Korean pickled radish is a quick and easy pickled radish that you can enjoy as a Korean side dish or banchan. It's ready to eat in one day and requires only five ingredients!

It's also called 'chicken mu' 치킨 무, which translates to 'chicken radish'. This is because it's almost always served with Korean fried chicken. The sour, vinegary, crunchy radish helps cut through the heaviness of fried chicken.

If you've ever been to a Korean fried chicken restaurant like Bonchon, this is the pickled radish side dish that's served alongside the fried chicken.

Korean radish has a rounder, shorter shape compared to a daikon radish and the top third or half of the radish is a greenish yellow. Look for one that feels heavy for its size without major blemishes.

Why do I recommend using Korean radish? It has a stronger flavor and crunchier texture than daikon radish. I find it also has slightly less water content than daikon radish which helps it keep its bite in the pickling liquid.

What to serve with this

Korean pickled radish is usually served with meals that are deep fried or heavy on meat because the bright, tangy radish lightens up. You can serve this with any of these meals:

Why use Korean radish?

You can certainly substitute with daikon if Korean radish is unavailable.

How long do I let this pickle?

Let the radish pickle for at least 24 hours in the refrigerator before serving, though it tastes best after 2 days. I recommend serving it chilled and consuming this within 4 to 5 days.

Where can I buy Korean radish?

You can find it in any Korean grocery store and at most Asian grocery stores. Look for one that feels heavy for its size and is not blemished. The top part of the radish should have a green hue.

More Korean side dishes to try: 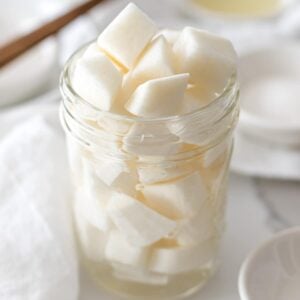