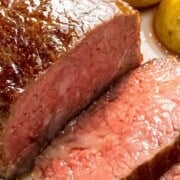 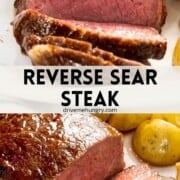 Learn how to get the best reverse sear steak! Follow this tried and true recipe for tender, perfectly cooked steak with a crispy seared crust. Reverse sear steaks are thick-cut steaks that are slowly baked at low temperature in the oven and then seared to perfection! It's the perfect main course for Thanksgiving, Christmas, Valentine's Day, or anniversaries!

My recipe for reverse sear ribeye steak comes after countless attempts and experiments to make the best steak possible at home. We've finally narrowed the recipe down to get the best reverse sear steak consistently, and we're excited to share the recipe with you!

We now prefer the reverse sear method as our go-to technique for cooking steak and think the results are even better than our local steakhouses.

Here's a handy time and temperature chart for reverse sear steaks (based on 2.25 inch steaks):

These are approximate times based on thick-cut ribeye steaks measuring 2.25 inches thick and weighing 14oz each. Account for differences and adjust as needed.

Carry-over cooking refers to continued cooking after removal from the heat source. The amount depends on the size of the steak and the baking temperature.

Thicker steaks baked at higher temperatures have more carry-over cooking because they hold onto more heat. I recommend taking them out of the oven closer to 12 degrees F to account for that.

Thinner steaks baked at lower temperatures have less carry-over cooking because they reach equilibrium sooner. I recommend taking them out closer to 5 degrees F.

What is reverse sear?

Reverse searing is a technique used to cook steak consistently and evenly at low temperatures in the oven. The last and final step is to sear it in a hot cast iron pan to create a crispy, brown crust, hence the name reverse sear.

The advantage of reverse seared steak is that you get consistent and even cooking on the steak while achieving a uniformly brown and crispy crust without the gray band. In addition, you have the flexibility of time since you can leave the searing step for right before serving the steaks.

Additionally, by slowly cooking the steaks in the oven first, you avoid hot spots and uneven cooking. Since they're baked in the oven, you can closely monitor the internal temperature of the steaks with a leave-in thermometer.

The final step is to reverse sear the steaks in a blazing hot pan to create a crispy brown crust. This step only requires 45 seconds to 1 minute per side, making it possible to get a perfect sear without the thick gray band you typically get otherwise.

Types of steak to reverse sear

You can reverse sear any thick-cut steak such as ribeye, New York strip, filet mignon, T-bone, or porterhouse steak.

Choose steaks that are at least 1.5 inches thick and uniform in size and thickness for even cooking time.

Dry-aged steaks are a fantastic choice for reverse searing because they produce incredibly tender, flavorful steaks.

For this recipe, I used thick-cut ribeye steaks that were 2.25 inches thick and weighing 14oz each.

How to Reverse Sear Ribeye Steak

The final result will be the best reverse seared ribeye steak you can make at home! The crispy, caramelized char on the outside crust is the perfect complement to the tender, juicy, perfectly-cooked steak.

There is virtually no gray band around the crust because of the reverse sear method, which creates a crispy, browned crust in merely 45 seconds if using a properly heated pan. 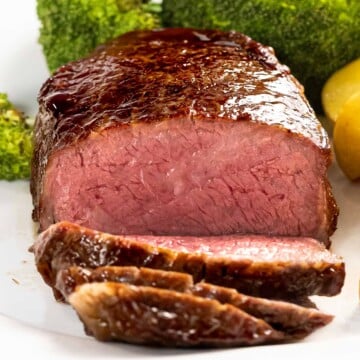 Reverse Sear on the Stovetop

How long should you reverse sear a steak?

The cooking times depend on the thickness of the steak and the baking temperature. For medium steaks measuring 2.25 inches baked at 225 degrees F, it takes approximately 35 minutes.

What is the advantage of reverse searing a steak?

The advantage of reverse-seared steak is that you get consistent and even cooking on the steak while achieving a uniformly brown and crispy crust without the gray band. In addition, you have the flexibility of time since you can leave the searing step for right before serving the steaks.