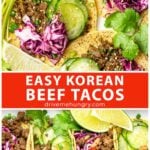 These Korean beef tacos are made with ground beef bulgogi and topped with kimchi, cabbage slaw, & pickled cucumbers! A delicious way to enjoy Korean tacos!

These Korean beef bulgogi tacos are so easy to make and ready in under 30 minutes! It's made with ground beef seasoned with a Korean bulgogi sauce and served on top of corn tortillas.

Add a tangy cabbage slaw and quick pickled cucumbers for crunchy texture to these Asian tacos!

Inspiration for this recipe

I had my first Korean beef taco during college when food trucks became popular. It was topped with spicy kimchi and crunchy pickled cucumbers. I was hooked ever since!

Why you’ll love these bulgogi tacos

For the sauce, you'll need the following:

What are other toppings for Korean tacos?

In addition to the pickled cucumbers and cabbage slaw, you can serve it with pickled radish, pickled jalapenos, or pickled carrots. Other good toppings would be sliced avocado, corn relish, or sriracha.

How do I store leftovers?

Store the ground beef filling, slaw, and cucumbers separately in an airtight container and store it in the fridge for up to 3 days. The cucumbers and slaw may release more liquid over time. Drain the excess liquid before serving.

Other Korean Recipes to Try: 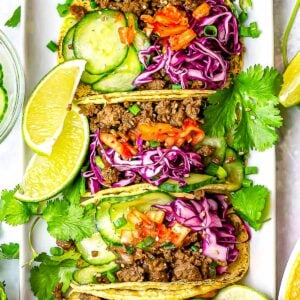