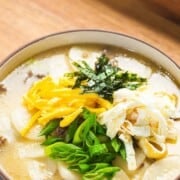 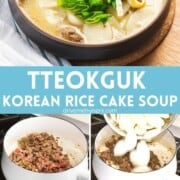 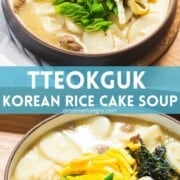 Traditionally, it takes over an hour to make this soup because beef brisket is boiled until soft and tender, but this quick and easy version is ready in only 15 minutes and has all the traditional flavors!

Korean New Year is called Seollal (설날) and marks the first day of the lunar calendar. It's a huge celebration in Korean culture that spans three days of family gatherings, including the day of, day before, and day after.

Eating tteokguk is a popular tradition on this day because it symbolizes getting a year older in Korean culture and its coin-like shape is thought to bring good fortune, prosperity, and wealth for that year. The white color of the rice cakes also symbolizes purity, new beginnings, and cleanliness.

A common custom is to say "you're now a year older" after eating a bowl of tteokguk on New Year's Day. These days it's eaten all throughout the year, and even on Western New Year's Day.

Tteok (Korean rice cakes) - Look for thinly sliced rice cakes in an oval shape. This type of tteok is different from the long cylinder shapes used in tteokbokki. You can find it in Korean grocery stores or Asian stores in the refrigerated or frozen aisle. If frozen, soak in cold water until they separate and thaw, about 10 minutes.

Beef - Use any cut of thinly sliced beef for quick cooking. I used thinly sliced rib-eye cut into bite-sized pieces for a rich flavor.

Stock or broth - I used chicken broth but you can use dashi, anchovy stock, or any clear light-colored stock or broth.

Vegetarian tteokguk - For a vegetarian version, use a vegetable broth or vegetarian dashi, and instead of beef use mushrooms and firm tofu cut into bite-sized pieces.

Tteok mandu guk - Tteokguk can also include mandu or Korean dumplings. Use any mandu you'd like. Both fresh or frozen mandu work well. 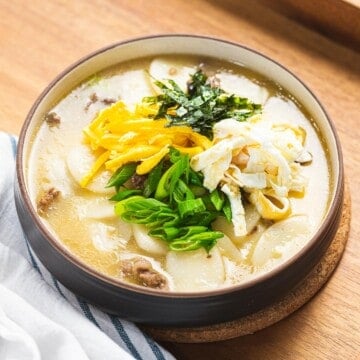 What does tteokguk symbolize?

Tteokguk symbolizes getting a year older in Korean culture and is thought to bring good fortune for that year. It's typically eaten on the morning of Korean New Year's Day, called Seollal (설날), but it's eaten all throughout the year these days.

Can I use frozen tteok?

Yes! Simply thaw by soaking in water for about 10 minutes before cooking. It should easily separate and thaw since they're thinly sliced.

Where can I buy Korean rice cakes?

You can find them in the refrigerated or frozen section of any Korean grocery store. They usually come vacuum-sealed or wrapped in an airtight bag.