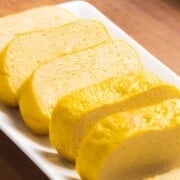 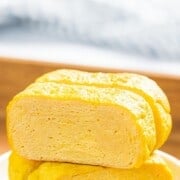 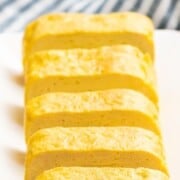 Tamagoyaki or Atsuyaki tamago is a Japanese rolled omelet made with beaten eggs that are seasoned with dashi, soy sauce & sugar. Layers are then rolled together in a tamagoyaki pan to create its shape. You'll love this easy 3 ingredient tamagoyaki recipe that's simplified for the home cook!

Try this easy version of tamagoyaki or Japanese rolled omelet! It's made with just three ingredients and will give you soft, fluffy eggs that are just like the ones in sushi restaurants!

Tamagoyaki (卵焼き or 玉子焼き, translating to 'grilled or fried egg') is a Japanese rolled omelet made by rolling layers of cooked egg one at a time in a rectangular pan. You may also find it called Atsuyaki tamago, meaning 'thick fried egg'.

The egg mixture is made by beating eggs with soy sauce, sugar, and other flavors giving it a slightly sweet and salty flavor with lots of umami. Other fillings or flavors you can add include seaweed, green onions, seafood, and cheese.

Tamagoyaki made with dashi is called 'Dashimaki Tamago' and is how you get lots of umami flavor with a soft, fluffy texture. Most sushi restaurants use dashi in their tamago giving it extra flavor. This recipe is most similar to dashimaki tamago in terms of flavor and texture due to the addition of memmi seasoning sauce and water.

How to serve tamagoyaki

There are several ways to serve this Japanese omelet:

I recommend using a tamagoyaki pan (affiliate link) if you want the traditional shape of a tall and thick Japanese omelet. A tamagoyaki pan is a square or rectangular pan with straight edges which help form the omelet into its rectangular shape.

If you don't have one, you can use any nonstick pan you'd like and simply cook and roll the egg mixture as described. The shape will be smaller but it will still taste great! 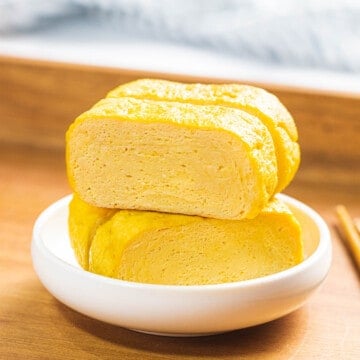 Tamagoyaki is a Japanese rolled omelet made with beaten eggs that are seasoned with dashi, soy sauce & sugar. Layers are then rolled together in a tamagoyaki pan to create its shape. This easy 3 ingredient tamagoyaki recipe is great for any home cook!
5 from 52 votes
Pin Share Print
Prep Time 5 mins
Cook Time 5 mins
Total Time 10 mins
Course Side Dish
Cuisine Japanese
Servings 6