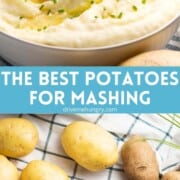 If you're wondering what are the best potatoes for mashed potatoes, you're not alone! Potatoes vary by texture, flavor, moisture level, and starch level which can all lead to very different types of mashed potatoes!

Why are Yukon gold potatoes the best?

If you prefer the fluffier, lighter texture of russet potatoes but still crave creamy mashed potatoes, I recommend using half Yukon gold and half russet potatoes for the best of both worlds.

Russet potatoes are starchy potatoes which have a lighter, fluffier texture. It's important not to over mash russet potatoes otherwise, they can get gummy or pasty due to their high starch levels.

A potato ricer (affiliate link) is the perfect tool for mashing high starch potatoes like Russets.

Read on if you're interested in the different types of potatoes and why some are great for mashing and others not so much.

Waxy potatoes are lower in starch but have a higher moisture content. This means that they produce creamier but denser and firmer mashed potatoes.

Common varieties of waxy potatoes include Red Bliss, New Potatoes, and fingerlings. They have very thin, smooth skin that have a subtle sheen to them in contrast to the rough skin of starchy potatoes.

You'll know you're dealing with waxy potatoes if they hold their shape when cooked. They don't break apart easily so they're great for soup, stew, and casseroles.

In contrast, starchy potatoes have high starch and low moisture content. When cooked they break apart easily and have an airy, fluffy texture. The most common variety of starchy potato is the russet potato.

Due to their high starch level, they can release quite a bit of starch when overworked. One way to reduce this is to soak peeled and cubed starchy potatoes in cold water. You can also use a potato ricer which keeps their airy texture while breaking them down.